Owner of The Wizard of Wines

Davian Martikov, owns the the Wizard of Wines vineyard and lives there with his extended family. Davian’s group includes the following people:

The party first met the Martikov family in the woods outside of the winery. After a tense introduction the family felt comfortable to reveal their true nature. They were wereravens.

Furthermore, the Martikov clan (and a handful of others) form a secret society they call “The Keepers of the Feather”. Not powerful enough to defeat Strahd on their own, the Keepers readily assist adventurers who find themselves drawn into Strahd’s domain.

The Wizard of Wines was founded by a mage whose name is buried in the annals of history. The wizard fashioned three magic gems, each one as big as a pinecone, and planted them in the rich valley soil. These “seeds” gave rise to healthy grapevines, which produced sweet, plump grapes. Even after Strahd’s curse settled over Barovia, the gems kept the vines and their grapes from succumbing to the darkness.

Ten years ago, one of the vineyard’s magic gems was dug up and stolen. No one knows what happened to the gem. Davian Martikov blames his middle son, Urwin, for the loss because Urwin was on watch the night the gem was taken. Davian is convinced that Urwin shirked his duty to spend time with his betrothed, and the two men have been at odds ever since.

Adding to Davian’s misery, the winery has been fending off frequent attacks by Baba Lysaga’s scarecrow constructs. Three weeks ago, during one such attack, another gem was found, dug up, and taken. Davian believes that it is in the possession of Baba Lysaga, who continues to send her scarecrows against the winery, antagonizing the Martikovs like a bad neighbor.

Several days ago, evil druids stole the third and final gem and bore it to Yester Hill. The Martikovs attempted a counterattack on Yester Hill, hoping to get it back, but to no avail. The druids and their blights proved more than a match for them. The druids returned with a horde of blights and drove Davian’s family from the winery. They then poisoned the fermentation vats, leaving the winery with only a few bottles and barrels of drinkable wine.

After liberating the Winery from the evil druids, the party travelled to Yester Hill to recover the stolen gem. They had to slay a monstrous tree blight, named Wintersplinter, but the party managed to recover and return the gem to its’ rightful owners. 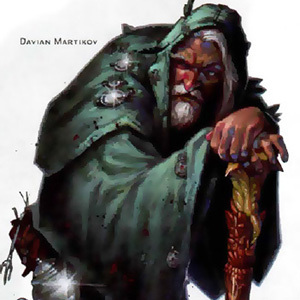