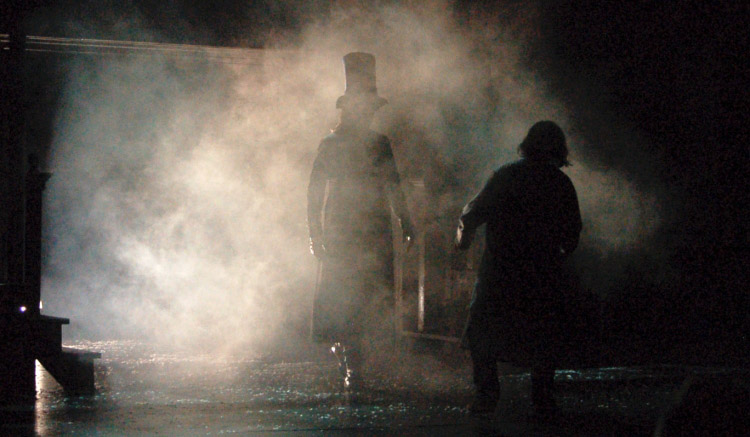 Most people travel through Ravenloft virtually unnoticed, but those with an exceptionally strong will or alignment actually attract the land's attention, particularly those with the convictions of a paladin. When the land does notice someone, his or her goodness inflames it. On the other hand, evil is a substance upon which Ravenloft quietly feeds, and evildoers ultimately face the greatest danger. If a persons actions are consistently evil – his or her personality void of redeeming features – then the land responds.

Ravenloft not only responds to evil, it appears to nurture it, because when that evil is strong, the land can trap it forever. The D&D game is designed for heroes, yet despite the best intentions of the Dungeon Master and all guidelines to the contrary, some people insist on playing the opposite. These players, if not careful, may find their characters wrested from their control.

If an act of evil gains the attention of the dark powers, their response is twofold. On one hand, they reward the evildoer with some measure of increased power – perhaps an improved sense or unique ability that sets him or her above all peers. On the other hand, they punish the act of evil by making some change in the individual that reflects both the heinous act and the nature of the reward.

As time goes by and more evil deeds are added to the first, the rewards and penalties handed out by the dark powers become greater and greater. In the end, even someone who began life as a pure and innocent babe may find him or herself transformed into a creature of absolute darkness and horror, ruling a domain.

The Fall From Innocence

The key to all elements in a Ravenloft adventure, is a sense of poetic justice. This is clearly demonstrated by all of the dreadlords, who suffer curses that reflect the crimes they committed.

In Barovia, Strahd lives forever alone but is eternally haunted by promise of an undying love that he can never claim – his beloved Tatyana continues to reincarnate and slip through his grasp. This macabre reflection is a vital part of the atmosphere of Ravenloft. Just as a curse should reflect the crime it punishes, a "gift" from the Dark Powers should relate to the crime that prompted it. For example, a thief who steals from a church poor box might find that he or she has acquired some aspects of a leech – they could discover they can climb walls with magnificent efficiency, but will also leave a trail of slime wherever they tread. If the rogue makes no effort to halt the descent into darkness, he or she will gradually become more and more like the parasitic creature. Eventually the rogue might even transform utterly into a giant leech, or maybe become the first of a new breed of lycanthropes. If the corruption is absolute, the thief might even garner his or her own, swampy domain.

A number of possible rewards and punishments for drawing the attention of the dark powers are listed under the campaign's  Dark Powers Check house rule.