Flanking Bonus
An opponent is flanked when threatened by creatures friendly to each other, able to attack the opponent, and located on the opponent’s opposite border or opposite corner. Attackers flanking a targhet have advantage on the attack roll. 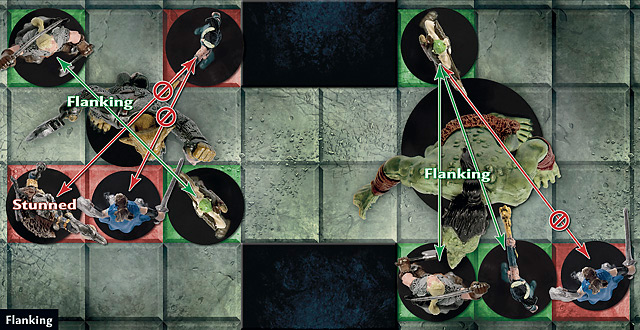 Players can attempt to leverage any skill they think might be helpful in achieving the goal. Though their may be limits on how many times any one skill can be attempted.

Fear and Horror
Fear is a response to an immediate threat, usually that of a monster or an enemy. Horror, on the other hand, implies a certain amount of revulsion, anguish, and repugnance.

Some situations evoke both fear and horror. When both a fear and a horror check are required, the player rolls the horror check first. If the roll fails, the fear check isn't necessary. If the character's horror check succeeds, the player then rolls a second saving throw for fear.

Fear and Horror checks use a character's Wisdom Saving Throw bonus vs DC assigned by the Dungeon Master.

Failing a Fear Check
The character must make a second Wisdom saving throw or drop whatever they are holding and become frightened. Whether or not objects are dropped, a character who fails a fear check is fearstruck. The survival instinct takes over, and he or she has no choice but to flee. The victim will go anywhere, as long as it increases the distance from the threat. A character who cannot flee can turn and fight, but the character has disadvantage on ability checks and attack rolls while the source of its fear is within line of sight. Fearstruck spellcasters have shaky hands, so spells have a 25% base chance, minus the caster's level, to misfire. Fearstruck players can re-roll the fear check with a -2 penalty at the start of each of their turns to attempt to regain their composure.

Dark Powers Check
A powers check is made only when a deliberate, calculated act of evil is committed. Of course, the more foul the act, the more likely it is to draw the attention of the dark powers and cause them to reward/punish the person committing it.

Some actions can appear evil until one examines the facts that motivated them. Other acts don't seem overtly evil, but for the same reasons they might force a character to make a powers check. As with all things, this is subject to a Dungeon Master's interpretation.

The normal powers check is a percentile roll, and the higher the result, the more likely the dark powers are to respond. For example, if the result is 00, the demiplane's strange powers automatically respond.

It is up to the Dungeon Master to decide upon the exact chance, but the particular action of the player character will set the parameters. Powers checks are not designed to occur easily – the threat of them is at least as important as the promise. Except in the case of acts of ultimate darkness (see below), the chance that the dark powers will respond to an evil deed is usually around 5%. In general, the chance should not exceed 10%.

In order to help arrive at a proper figure, Table 7: Recommended Powers Checks has been generated, which lists various categories of evil acts. The terms employed in the table are defined below. Note that each category is cross-referenced against the type of persons suffering from the act (or the faith that has been offended). These are, of course, just guidelines. Anyone who commits an evil act with unusual cruelty, or who is especially malicious, should find the chance of failure increased by 1 or 2 percentage points. 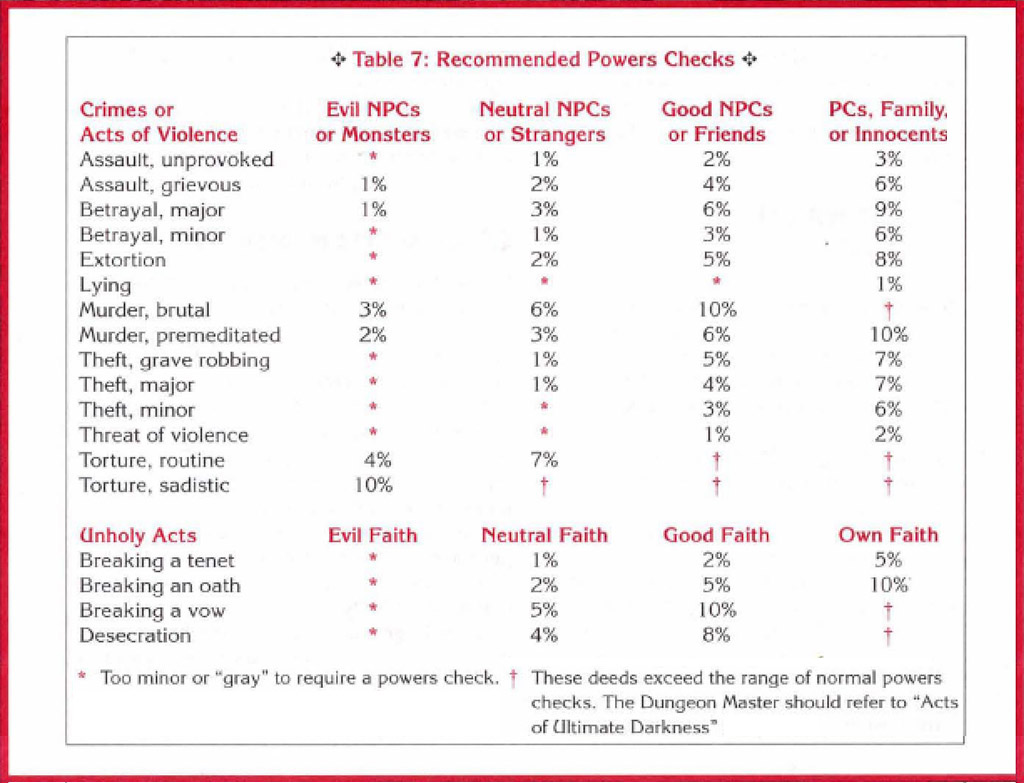 Acts of Ultimate Darkness
In some cases, a character will commit an act so vile that a powers check seems to be an insufficient response. These deeds are termed "acts of ultimate darkness," and they have a much greater chance of drawing the attention of Ravenloft's dark powers.

A perfect example of such an act would be Strahd's murder of his own brother in an attempt to possess his brother's betrothed. This crime involved betraying and murdering his own kin, driving an innocent woman to suicide, and making vows to forces darker than any mortal was ever meant to treat with. Clearly, this act merits a powers check well beyond the normal maximum of 10%.

When a player character commits an act of ultimate darkness, the Dungeon Master is free to assign any chance of failure, be it 25%, 50%, or even 100%. In the latter case, the Dungeon Master has seen a player character attempt an action so vile that he or she cannot help but punish it. When this happens, automatic failure of a powers check is a perfectly acceptable response.

Stages of Evil
If the dark powers act, the response varies in intensity from stage one (the weakest) to stage six. With each continuing offense and failed check, the response rises one level. If a player character reaches stage five, his or her adventuring days are over – the player must give the character to the Dungeon Master. The character becomes an NPC, and a thoroughly evil and vicious opponent with which all the players must now contend. If the Dungeon Master chooses, the monstrous character may fail a final powers check, at which point the land grants the character a domain and makes them a dreadlord. 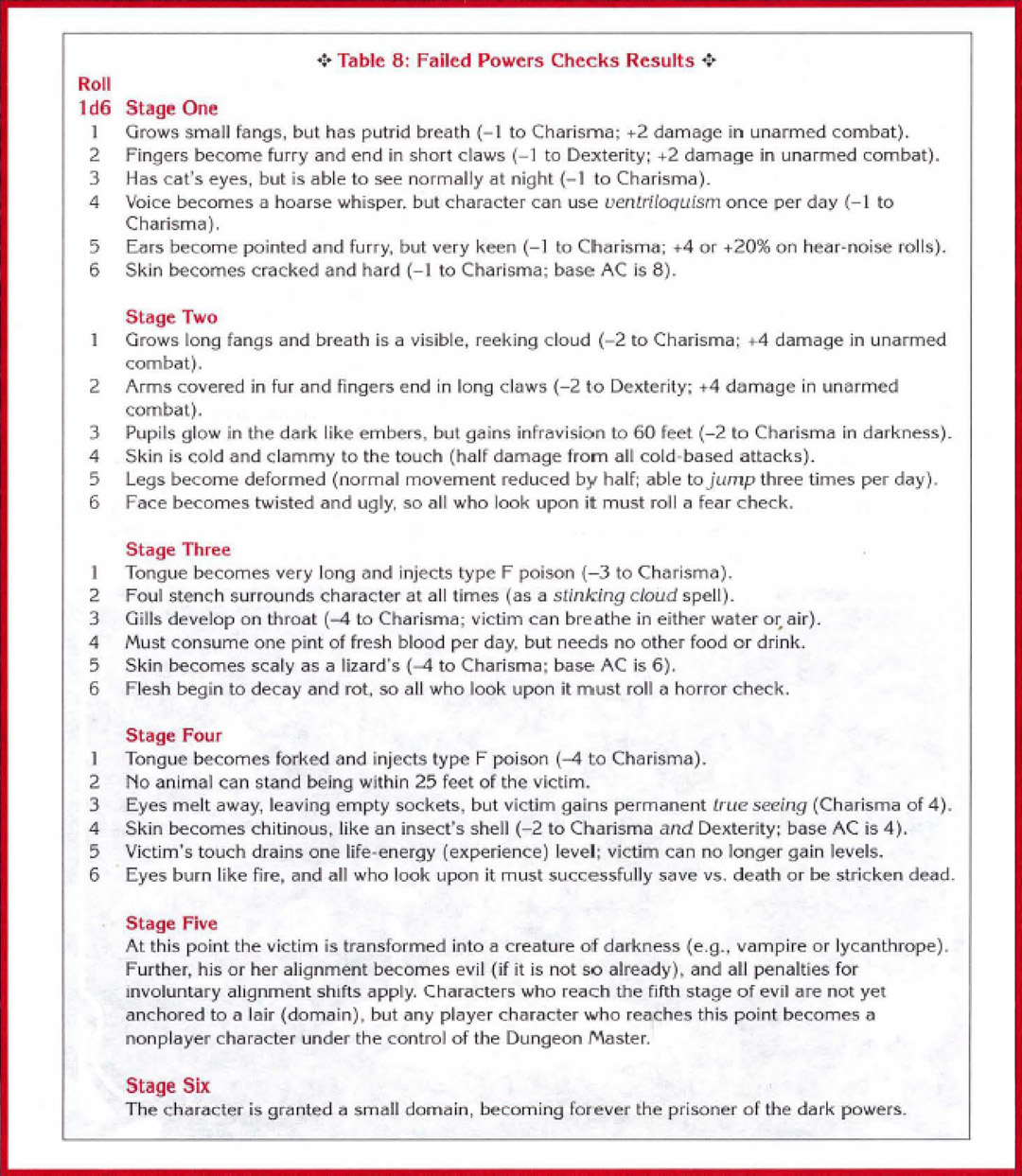 In general, responses occur one stage at a time. However, if the character's actions are incredibly heinous, the powers may grant two responses instead of one (stages two and three, for example). The results are cumulative, so a character who reaches stage six still retains the mark of every preceding response. Table 8: Failed Powers Checks Results provides a list of possible outcomes for a failed check, and they can be chosen or determined by the roll of a die. However, the best fallout of a failed powers check is that which specifically relates in some way to the transgression that garnered the attentions of the dark powers.

Stage one, the enticement: At this point the dark powers only wish to test the depths of the offending character's potential for evil. The rewards and punishments are slight, and it is often the character's reaction to them that will determine his or her future. Therefore, the boon that the character enjoys is just a taste of power, and the drawback is minor at best.
Stage two, the invitation: By now the character has shown a genuine propensity for evil. Chances are he or she has enjoyed the benefit of the first failed check, and that its penalty has been a source of amusement. Now the dark powers want the character to feel a thrill of potency, and they want to see if he or she is not distressed by obvious signs of vice.
Stage three, the touch of darkness: By this time the character has accepted the invitation of the dark powers and embraced the trappings of evil. Associates of the persona should be fairly alarmed, for their erstwhile companion's evil is sure to have taken a more selfish turn – acts of darkness performed on behalf of the adventuring party are more frequently supplanted by actions that benefit the character alone. Now the dark powers are grooming the offender for nastier things to come, and redemption is nearly beyond reach.
Stage four, the embrace: When a character reaches this stage of moral decay, the dark powers have become intimate with his or her flaws, and they are well pleased. Now the character feasts upon potent fruits of black puissance, becoming a lethal menace to all who hold any shred of light in their hearts. Atonement is nothing less than miraculous now, for few creatures reach this point without having become thoroughly evil. If the character has not already been completely estranged from his or her comrades, they should surely abolish him or her now.
Stage five, creature of Ravenloft: At this point the character is transformed into a fiendish creature of the night, such as a vampire, ghost, or lycanthrope. His or her alignment shifts to evil (if it is not already so). Those who reach the fifth stage of corruption are not yet trapped within a domain of their own, but they are wholly tools of the dark powers. Therefore, they become NPCs whose only chance for redemption lies in death and atonement, performed by those who knew the monster when it was mortal.
Stage six, lord of a domain: At this stage a character has proven that he or she belongs in Ravenloft forever. The next time the character steps into the Mists, the land reacts and creates a new domain. At the Dungeon Master's option, the new domain can be attached to another domain or float separately. No player character can be a lord. He or she becomes an NPC controlled by the DM. Like all other lords in Ravenloft, the character can never leave his or her domain. New darklords wield great power in their own realms, but they also suffer a "dangerous" curse, laid upon them by the powers of Ravenloft.